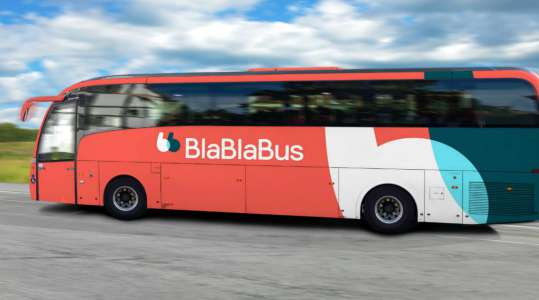 After the purchase of French SNCF’s Ouibus last year, the world’s leading carpooling platform expands its horizon by launching its own long-distance low-cost coach service. Belgian passengers can now jump aboard a BlaBlaBus on the Amsterdam-Brussels-Paris line inaugurated on Monday. By July 1st, ten lines will be in service. By the end of the year, there will be more than 400. The world’s leading carpooling platform is broadening its activities. Last year already, BlaBlaCar took over the SNCF’s coach service Ouibus for an undisclosed amount. Since then, not much was heard of the company’s plan. Only the co-founder briefly spoke about it. “Our objective is to create a platform that gathers all mobility possibilities in one place. Carpooling or buses” declared Frédéric Mazzella.

On Monday, the French company officially opened a new BlaBlaBus coach line connecting Amsterdam to Paris through Brussels. “By July 1st, ten lines will connect the UK, France, the Netherlands, and Belgium. BlaBlaCar’s objective is to allow passengers to choose the means of transport that suit them best,” declares Audrey Wolfovski, France and Benelux Manager.

But, isn’t there a risk that the bus activity absorbs many of the carpooling’s users? According to the French company, it isn’t the case. “The idea is to offer complementarity. Coaches are ideal for connecting major cities. Cars will still be used for specific journeys from point A to point B,” explains the manager. Mrs Wolfovski adds that by the end of 2019, BlaBlaBus coaches will drive to more than 400 destinations in ten European countries.

Despite its purchase, the carpooling leader hasn’t bought itself a place in the most prosperous sector. Admittedly, coach services have regained some wind in their sails, but no operator is making any profit yet. French SNCF decided to get rid of Ouibus because it was accumulating losses. BlaBlaBus’s objective is, thus to expand and gather the most market share possible.

Competition is also growing thin. Back in 2016, Ouibus bought Starshipper while German Flixbus took over British Megabus. In May this year, the German company purchased Euroline/Isilines from Transdev. Today, Flixbus stands as BlaBlaBus’ only competitor in the French and Belgian markets.