Blog  /  New flights between Brussels and East Midlands take off 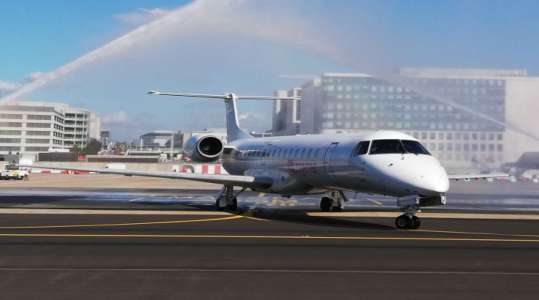 New flights between Brussels and East Midlands take off

Scottish airline Loganair launched a new route from Brussels Airport to East Midlands Airport in the UK on Monday. It’s the second route out of Brussels for the airline – the UK’s oldest – which already operates 10 flights a week from Brussels to Newcastle.

There are two flights from Monday to Thursday – one morning and one afternoon – and one afternoon service from Friday to Sunday. Flights return from East Midlands Airport – about 20 kilometres south of Derby – once per day at 16.30.

The previous route between Zaventem and East Midlands ceased in February when Flybmi airline, based at East Midlands, folded. “We’re pleased to restore the air route between Brussels and East Midlands Airport, following on from our successful introduction of our first route from Brussels to Newcastle earlier this year,” said Loganair director Jonathan Hinkles. “Bookings have been encouraging, with business travellers now being able to take advantage of Loganair’s rewarding frequent flyer programme, Clan Loganair.”

The first 49-seat Embraer 145 aircraft departed Brussels at 9.50 on Monday, arriving in East Midlands one hour and 10 minutes later. The airport is well-placed to access the cities of Derby, Nottingham, Leicester and Lincoln.

The restoration of the route “is likely to be well received by businesses in Belgium and in the Midlands of England,” said Loganair in a statement. “Both regions have strong business links, especially in the manufacturing sector. That includes Toyota, which has a manufacturing plant in Derby and a European head office in Brussels.”