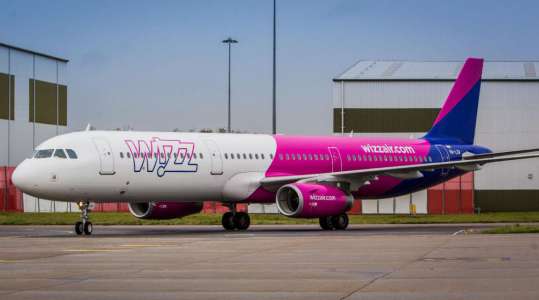 Wizz Air, the largest airline in Central and Eastern Europe, has announced the arrival of another Airbus A321neo at the base in Budapest in June 2020, as well as the launch of three new routes from the Hungarian capital.

Brussels South Charleroi Airport has been part of the WIZZ network since 2004. From next summer, the airline will also fly daily between Brussels Airport and Budapest. Brussels Airport is the 151st destination of Wizz Air. WIZZ is also expanding to the East with two flights a week to the Ukrainian cities of Lviv and Kharkiv.

In addition to the new destinations, Wizz Air is also increasing the number of flights on existing routes from Budapest to Eindhoven, St Petersburg, Tel Aviv and Edinburgh (to be launched in December).

With this A321neo included, Wizz Air will base a total of 14 aircraft in the Hungarian capital. The new routes and frequency increases bring the seat capacity of Wizz Air from Hungary in 2020 to 6.7 million.

The new routes will be operated with the most recent Airbus A321neos. Wizz Air has one of the youngest fleets in Europe, with an average aircraft age of 4.7 years. As a result, in August 2019, Wizz Air was once again the airline with the smallest ecological footprint in Europe, with only 57.7 grams of CO2 per passenger per kilometer. Wizz Air currently has a total of 271 Airbus A321ceos, Airbus A321neos and Airbus A321XLRs to order. With these new devices, the carrier will be able to further increase its efficiency, while its ecological footprint will decrease by a third in the coming 10 years. The Airbus A321neo, of which six are already based in Budapest, has state-of-the-art aircraft technologies. This device has a soundprint that is half the size, uses 20% less fuel and emits up to 50% fewer nitrogen oxides.